Collaboration can be contagious!

Can you achieve co-ordination amidst chaos?  Does control help?  We argue NO in this article

Read this 100 word story before you read the rest.

You are dining out with a group of very good friends. The group is 24 people, male and female.  You have good food and drink.  The time extends into five hours and people are feeling happy and contented when the woman across the table from you bursts into animated song.  Very quickly, the whole table is singing loud enough to rattle the glasses.

In Spain as well as Ireland, this is commonplace, however, I was worried about disturbing other people in the pub/restaurant.  Then, to my surprise all the other people joined in!  It even brought people in from outside. 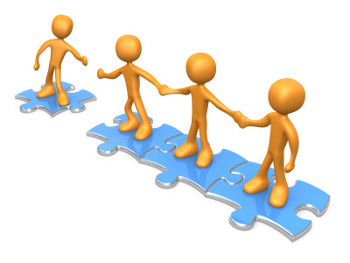 Last August, Hurricane Irene swept up the east coast of the US.  Vermont was badly hit and Irene emptied 250mm of rain in a day. Rivers burst their banks, floods caused destruction to homes, roads and businesses.  There was chaos and destruction, yet somehow a sense of order developed.

Local officials and Red Cross were too slow in bringing help.  In an article in the Brattleboro Reformer on 8th August 2011, it says

"Within an hour or two on Monday morning [the day after the storm], residents had organized a meeting at the Williamsville Grange for that evening to assess what folks needed and what others had to offer. A sandwich board advertising the meeting was erected in front of the Grange and notices were posted by bike along the flood path and the one usable road. No one asked permission to use the Grange, owned by the town, and no one waited to find out if the Selectboard was going to do something. It was clear that action was needed and it was taken. At the appointed hour, close to 100 residents crowded into the hall. Two members of the Selectboard were there along with the town clerk.

"The meeting could have easily turned into an unequal exchange of the citizens being instructed by our official leaders, but our elected town officers are better than that. They acknowledged the purpose of the meeting - neighbors reaching out to each other - honored that agenda, and served it well, all the while contributing what they could as town officials."

In this example, it was the people not the officials who helped themselves and it was similar throughout the flood areas.  It was the positive actions of locals that saved the day.  Concern for neighbours, the ability to assess local needs, and an understanding that, "we all have a job to do to keep the common good functioning and healthy!"

In Ireland, the lack of sufficient response from Enterprise Ireland and County Enterprise Boardss to the dire need of micro and SMEs for assistance has caused others to take the mantle.  Partnerships throughout the country are pulling things together themselves, chambers of commerce are doing things, private individuals are pulling together initiatives to assist (watch this space for future announcements), businesses are forming alliances to weather the storm (no pun intended).

In Thailand in the past week, the response from the military and the government is not what the people want.  The people are opting to stay in their homes when they can because they are afraid of looting.  Their possessions could be gone in the blink of an eye and then they would have nothing to fall back on.  The military are accusing the people of hampering the process and indeed using them as water taxis to get around.  In short, the people are doing what they have to survive.

The recent Priory Hall debacle in Dublin showed the residents themselves started to take action because adequate support was not offered by the ‘system’.

This type of self-help is not unique to the examples above. There is a natural tendency toward organisation that can be seen in both nature and in human systems.  Nature hates a vacuum and if one is created, as in the examples above, it will be filled.  Humans tend to reorganise themselves after a crisis. The best laid plans can fall apart due to unforeseen variables. But people on the ground closest to the action often know exactly what to do and how to do it. Long before official help can arrive people take action, for example if you came across a road accident, you would take immediate action to assist, direct traffic and so on.

collaborateOn Joe Duffy’s Liveline radio show recently (RTE Radio 1 - 1st week Nov 2011) they were discussing the horrific attack by James Kenny who cut off the fingers of artist Alexandra Trorsenko and stabbed her many times.  It seems there is no artists association, so, many people phoned in offering their assistance to help her.  This not only shows the good side of human nature, but also indicates the self-help attitude of people helping people.

These are all examples of self-organising systems, situations where good gets done without a specific authority in control and without a pre-determined plan. Self-organising systems usually develop around a central goal or idea that people share in common such as the notion that my safety is dependent upon yours, or that it takes a village to raise a child.  The Vermont example explains the notion that a community is built when everyone makes a contribution.  It’s the same in a business setting.  A business is created when everyone makes a positive contribution.

It is proven that people don’t always need direction, they can take action themselves, for the common good.

Similarities have been drawn by such writers as Fritjof Capra, Margaret Wheatley, and Peter Senge between the ways that we have structured our human systems for years and phenomena in the natural world.  These theorists have focused on the similarities between organisational life and natural systems in biology, chemistry, physics, and the environment.  Some of these are:

From a business perspective, we can learn from this.  When people understand the goals and objectives of their organisation, they will characteristically prioritise and focus their activities to suit.  They don’t need to be micro managed.  They will decide on what’s important and whether new ideas are worth following. Having strong and consistently communicated values, traditions, aspirations, competencies and culture all allow the organisation to be somewhat independent from the environment. There can be fluctuations at the individual level yet the whole system remains stable.

Unlike the rest of us, Apple never seems to worry about competition.  They set their own standards and expectations and always aimed to exceed them.  "I'm not sure Apple even thinks about the competition." says Keith Yamashita, a consultant with Apple. "They're uniquely themselves without worrying about anyone else. When I worked for Steve (Jobs) there was little discussion about the competition."  Check out the Kaizen principle.

For those of you who run training courses like me, here is an activity to demonstrate the efficiency of a self-organising system.  This will work with a minimum group size of 12.

Ask people to enthusiastically begin a round of applause as if they have just heard the best speech ever.  Thank them for their efforts.

Now ask them to applaud and try to coordinate the clapping into a single, unified, rhythmic beat.  As the facilitator, you do not applaud or join in.

Usually, the group will settle into a united rhythmic beat.

Was there a leader?

How did people know what to do?

Can anyone recall how they chose the particular rhythm to clap?

Usually, people have a difficult time explaining how the order materialised out of chaos of the first activity.

Now ask people to "Start clapping randomly and enthusiastically as before but this time try to coordinate the clapping into a single, unified, rhythmic beat that is different from the rhythm you used last time."

If they were not successful (notice I didn’t say ‘fail’) or would like to try again, then give them some new instructions.  "Usually groups that do this activity come up with the most interesting rhythm on their third try so I have every confidence that a group of your calibre will be just as successful. You don't need a premade plan or designated leader. Listen carefully to what is happening nearest you and when you hear an interesting rhythm, try to join it and amplify its influence. Start!"

Discussion after the activities

Discussion should be around what helped them succeed at the activities or not.  Some comments could be like:

There are many business lessons here that we can all learn about leadership styles, motivation and attitude.

I would be interested in hearing your thoughts on this article.  Is there a trace of realism to it? As a leader, would you try it out or do you do it automatically?  A leader need not necessarily be a manager.  A leader could be a parent or anybody who guides others to achieve goals.  Share your thoughts below or email me personally.