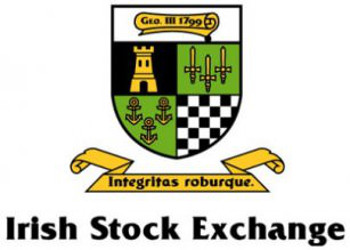 Trading volumes on the ISE (Irish Stock Exchange) rose by 14.2 per cent in 2011, with more than 2.4 million trades over the year, according to its annual report.

Average trades per day remained steady at over 10,000 in each of the last two quarters of 2011.

Interestingly, the market capitalisation of companies included in the ISEQ indices rose by more than €20 billion during the last quarter, reaching €86.9 billion at the end of December 2011, an increase of 32.1 per cent in Q4 while over the calendar year the increase was 80.7 per cent.

Average daily turnover in Irish equities was down slightly to €131 million from €133 million in Q4, while overall turnover fell to €8.2 billion from €8.8 billion in Q4 due to the number of days in the period (63 days compared to 66 days in Q3).

Overall the report said that in 2011 the ISEQ General index rose by 5.2 per cent while other indices remained at about the same levels logged at end 2010. The ISEQ Financial index, the Small Cap and ESM index all fell by more than 15 per cent in 2011.

The ISE said that all equity indices, with the exception of the ISEQ Small Cap, showed growth in Q4, with increases ranging from 5.3 per cent to 31 per cent. It said the suite of ISEQ 20 indices, which represent 20 of the largest and most liquid equities quoted on the ISE, performed particularly well during the period with the ISEQ 20 up 15.5 per cent, the ISEQ 20 Capped index growing by 11.7 per cent and the ISEQ 20 Leveraged index rising by 31 per cent. The ISEQ General and the ISE Overall indices also showed double digit growth in the fourth quarter of 2011.

As expected full year turnover and trade statistics in Irish Government bonds and Treasury bills were down 73.4 per cent and 48.7 per cent respectively compared to 2010, an obvious reflection on the Government’s decision to exit the bond markets in Q4 2010. However, while market capitalisation of these bonds and Treasury bills fell back 8.6 per cent in Q4 they remained largely stable year on year with a value of €73.4 billion at end December 2011, just showing a 1.9 per cent drop in value against 2010.

It added that in the last quarter of 2011, turnover in Irish Government securities returned to the levels experienced earlier in the year with turnover coming in at €17.3 billion (Q3 – €23.1 billion). Daily average turnover in Q4 was €274 million, compared to €351 million in Q3. Deal numbers in the last quarter also reflected lower activity levels, with the number of trades being just over half the levels experienced in Q3 of 2011.

One further extract from the ISE report said the impact of challenging conditions in international capital markets remained a factor in the level of fund and debt securities admitted to listing on its markets. This was born out by the number of new listings of funds and sub funds was 80 in Q4 (Q3 -113) with the level of debt tranches admitted to listing at 518 for Q4 compared to 548 for Q3.