Strong demand for Irish shares during 2014. 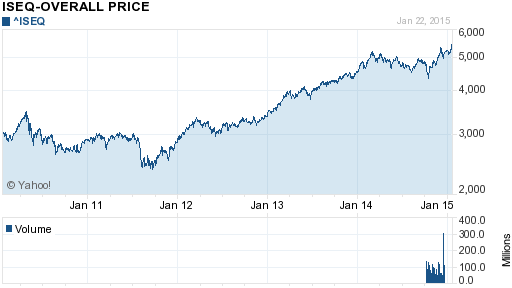 The statistics published today also show that over €300m was raised by ISE listed companies in Q4, bringing the total for the year to €1.3bn.

The statistics also show that the ISE reached a major milestone during Q4 with more than 25,000 debt tranches listed at the end of the quarter. This represents an increase of 15% on the end of 2013.

The ISE now counts more than 32,000 securities listings from more than 4,500 issuers located in 85 countries across the globe including Europe, the USA, Latin America, the Middle East and Africa.

Additional listing activity was evident across all debt product types in Q4, with the ISE attracting debt listings from issuers such as Fannie Mae (US), Sky plc (UK), Saxo Bank (Denmark) and Fosun International (the largest privately owned conglomerate in mainland China).

The Federal Democratic Republic of Ethiopia became the latest African country to list its sovereign debt on the ISE during Q4. Other African nations to have securities admitted to the ISE’s debt markets include Kenya, Senegal, Rwanda, Ghana, and Egypt.

The quarter also saw Wisdomtree, one of the largest exchange-traded product (ETP) providers in the world, list its first UCITS exchange-traded funds (ETFs) in Europe on the Irish Stock Exchange. The four ETFs, which have their primary listing on the ISE’s Main Securities Market, provide exposure to large and small-cap European and US equities and focus on dividend-weighted indices.

The Q4 statistics are available at www.ise.ie.

Issued on behalf of the Irish Stock Exchange by Gordon MRM

To see further articles on The Irish Stock Exchange please go to -http://www.dpnlive.com/index.php/business-finance/business-and-finance/irish-stock-market