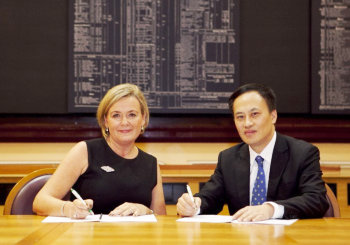 Deirdre Somers, CEO of ISE with Dr Que Bo, VP of Shanghai Stock ExchangeThe Irish Stock Exchange (ISE) has today published its review of 2014, during which the ISE consolidated its position as a leading global centre for debt and funds listings and three new IPOs raised a combined total of €484 million for companies listing on the ISE.

Chief Executive Deirdre Somers said 2014 was another strong year for the ISE as it continued to grow its revenues and completed changes to its corporate structure that will facilitate future growth.

“This was a landmark year for the Irish Stock Exchange,” said Ms Somers. “We added over 7,000 new debt listings and 1,600 new fund classes during 2014, finishing the year with more than 32,000 securities, representing over 4,500 issuers located in 85 countries.

Transactions in the Irish equity market grew by 30% in 2014, to a record high 4.5m trades for the year, maintaining the ISE’s position as the dominant pool of liquidity for Irish equities. ”

“The ISE’s successful transition into a public limited company during 2014 reflects the ambitious, diverse international business the ISE has become. Our new structure will complement our strategy of becoming the number one EU exchange for global fixed income, funds and Irish securities by 2018.”

Other key highlights of the year included:

Mainstay is the first company on the Irish market to have a dual quotation with Euronext Paris. The ISE now has active dual listings with the UK, US, Canada, France and Switzerland.

Issued on behalf of the Irish Stock Exchange by Gordon MRM

To see further press releases by the ISE please go to http://www.dpnlive.com/index.php/business-finance/business-and-finance/irish-stock-market