High Consumption Foodstuffs in DRC:
Where Are the Surpluses and Deficits? 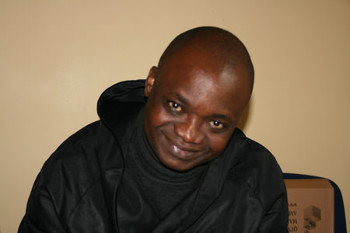 Dr Jean-Pierre Eyanga EkumelokoKeen observers of the Democratic Republic of Congo have surely noticed a general decline, in the past 20 years, of the countries agricultural production. This has resulted in a collateral effect with deficits in areas where there used to be surpluses back in the 1970s and 1980s.This has occurred because of various combined factors, including civil unrest, lack of coherent policies, poor resource management and lack of transport infrastructure maintenance, even though highly educated and capable people are available in the relevant ministries.

The DRC agricultural policy aims to enable people to take charge of their own lives, produce enough food to ensure a balanced diet in quality and quantity, and improve the human development parameters.  The overall objective of this agricultural policy is to ensure food security for the Congolese people and reduce poverty.  As an impact, it will lead to a sustainable agricultural development which will create added value and boost the national economy.

According to ANAPI, the Congolese national agency that holds investment promotion, specific objectives include the following:

A very brief overview of the structure of the DR Congo’s economy shows, as is the case for many developing economies, that the agricultural sector contributes the most to economic growth. Although mineral and ore exports comprised 89% of total export earnings in 2008, mineral extraction accounted for only nine per cent of GDP in 2009. 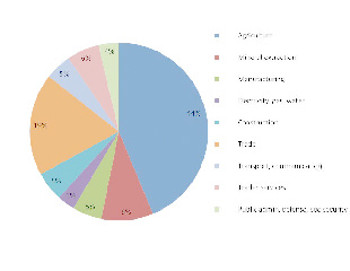 Based on the data from the Banque Centrale du Congo.

congo agricultureWithout either trying to exonerate decision and policy makers from their responsibilities or minimise the impact of other hindrances to the development of the DRC agriculture, one can certainly join Dr Hubert Ramazani, the General Secretary of the Ministry of Agriculture, Fisheries and Livestock in recognising that with various armed conflicts the country has known since 1998, especially affecting rural areas, the agricultural sector has been the most affected. It has known the destruction of all agricultural heritages. Today, the country is now getting back on track, towards recovering, rehabilitating and developing its lost assets.

The most important food crops are cassava, plantain, maize, groundnut and rice. Very often, cash crops (Coffee, palm oil, sugar, cocoa, rubber, cotton, tobacco, tea, quinquina and papain) are produced by small farmers for both internal consumption and export needs.  In fact, worldwide specialists recognise that the DRC holds tremendous capacity to feed more than two and a half billion people; yet with only ten percent of its 227 million hectares of land suitable for agriculture, and only 1-2% of arable land actually in use, it currently struggles to feed its population of 68 million.

According to the United Nations Development Programme, approximately 21 million people in the DR Congo are food insecure.  At the 2004 Agriculture Roundtable, policy makers supported by donors and other development partners noticed the food insecurity and suffering facing almost 70% of the country population, thus they produced a common strategic document that outlined the approaches and actions to tackle these problems in other to successfully address the situation.  Furthermore, in 2008 and 2009, respectively 72% and 71% of the population were estimated to be food insecure and, living below the poverty line. One study estimated that 27% of surveyed households consumed only one meal a day.

This significant number of food insecure people and the country's high poverty head-count are largely the result of decades of poor political, economic, and social 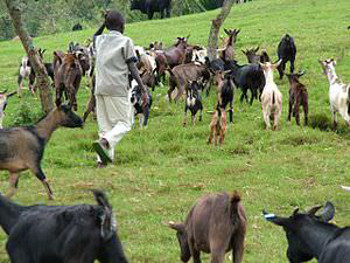 Animal_husbandry_in_Congopolicies.  These have resulted in under-investment in basic infrastructure and nearly nonexistent social services. The country that was once a major exporter of food products, such as coffee, cassava, palm oil, palm kernel and tea, is now a major importer of these products.

Besides, the International Food Policy Research Institute (IFPRI) has blamed the government's lack of support for agriculture for continuing food insecurity in the country.  Indeed, many farmers have struggled to gain access to credit and there has been a prolonged lack of both public and private investment in agriculture, as well as in the country's energy and transport infrastructure. Recent global food price rises have hit the import-dependent DRC hard.

Farming is predominantly low-input and subsistence-based, with farming methods based on the use of hand tools and traditional methods (slash-and-burn farming, with long fallow periods); there is little commercial activity, particularly in the wake of the civil war and other conflict.  Steps need to be taken so that the majority of Congolese households can be moved away from situations where they are obliged to practice subsistence agriculture and rely on informal employment opportunities for income, such as the sale of agricultural products, petty trade, and contract work.

However, the country is gradually regaining ground, especially through the field of seed production which is the basis of agriculture in a country. The revival of the seed sector is already successful in some provinces, such as Bandundu, Bas-Congo, Province Orientale and Katanga.

Nowadays, three types of agriculture production systems coexist in the DR Congo: traditional agriculture, modern agriculture and "group agriculture” Traditional agriculture primarily focuses on food crops, and accounts for over 80% of the country's production.  Modern agriculture, which began in colonial times, is based on modern means of production.  This type of agriculture is limited in the DR Congo, and mainly includes large agribusiness companies that operate large areas with high yields; it is most commonly used for export crops.  "Group agriculture" involves group farming supported by cooperatives (and, in some cases, religious organizations) and arose from a long-standing absence or ineffectiveness of national rural development services that favour labourers. 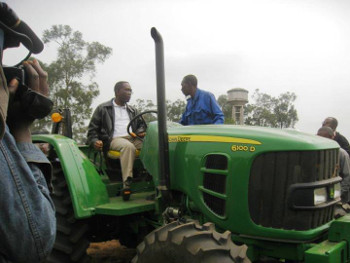 Almost all farms in the DR Congo are small-scale (less than one hectare) and fall under the traditional agriculture characterization.  Traditional farms are mostly run by peasants, who account for 70% to 80% of rural populations.  According to the results of baseline surveys carried out in 2009 by Action Contre la Faim in Kivu Provinces (2005 – 2008) and Food for the Hungry in North Katanga District, a study in one district found that the income of the average rural household member earns less that US$0.25 per day, 25% of which is made up by the sale of agricultural produce.  Moreover, 68% of rural households' income is spent on food.

With regard to modern agriculture, the DRC Bellmon Analysis 2007 states that only a handful of large farmers (which account for less than 10% of all of the country's farmers) have animal traction or mechanized technology, and nearly all of those are located in southern Katanga province, which also recently saw the development of some medium-sized farms of 10-30 ha.

According FAOSTATS, , the DR Congo on average produces 1.5 million MT of cereals, 1.2 million MT of coarse grains, 330,000 MT of oil crops, 195,000 MT of pulses, and 16 million MT of roots and tubers.  The current annual production is around 20 million MT for all crops combined, which is far from sufficient to meet national demand.

With a 3% population growth per year and a steady decline in food production, experts notice an increase in the inability of the DR Congo to meet its food requirements, as shown in the following table which highlights estimated food needs of certain crops for Kinshasa. FAO Statistics 2006 for cereals and pulses show that the country's food deficit is estimated at between 20 and 30 percent, depending on regions.

The main crops grown in the DR Congo include tubers (mainly cassava), plantains, maize, rice, groundnuts, and beans.  The table below shows the decline of production of major agricultural commodities in recent years.

(Source: Ministère de l'Agriculture, de l'Elevage et de la Pêche, FAO; FAO statistics are for 2009, except for meat and poultry which are 2008 figures).

northeastern-congolian-lowland-forests-mapTo tackle this deficit situation, Government has decided to use three different approaches: projects, humanitarian assistance in some areas and programmes where a wide range of activities come into play in a well defined area.  Thus, a $120 million programme with the World Bank is now being implemented in the northern part of the Province of Equateur to boost agricultural production through: (i) rehabilitation of infrastructure (roads of agricultural importance and construction of warehouses); (ii) rehabilitation of equipment e.g. base stations for INERA (National Institute for Studies and Research in Agriculture) to produce seed; (iii) rehabilitation of some rivers to improve navigation.  With IFAD, in Province Orientale, there is a range of various programs with different components including roads, health centres equipment, construction of schools, etc...

According to Dr Ramazani, animal farming has suffered in DR Congo, especially in the eastern part of the country where big animals were either completely destroyed or taken away to neighbouring countries because of war. In North and South Kivu, Ituri (Province Orientale), North Katanga, Bas-Congo, Bandundu and both Kasai, efforts are being made to revive cattle production.  With regard to poultry and pigs, local production is facing a very strong and unfair competition from low cost imported products.

Without any risk to be mistaken, one can see that even though some measures are taken and resources allocated to the agriculture sector, further seriously coherent national policies have to be made and tangible strategic steps taken, supported by a genuine political will of the country’s leadership to create a national, strong and competitive agriculture, as the one Congo had prior to its independence, which made this country at that time the biggest agriculture power in Africa.

The Congolese leadership don’t need to re-invent the wheel but rather take advantage of and learn from the expertise, knowledge, technology and experience accumulated by countries like Ireland and Brazil to improve its own production, transformation and management capacity in order to make the countries agriculture highly productive and competitive.