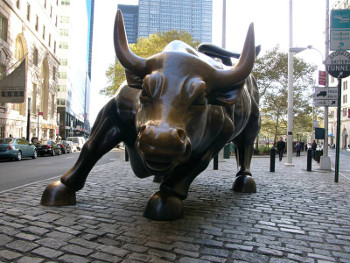 The UK FTSE ended up 2.3 per cent to close at its highest level since the end of October last year as it played catch-up on the gains made elsewhere on Monday when the London markets were closed for the New Year bank holiday. It appeared that strong positive economic data coming out of China, Germany and the US encouraged investors to put aside fears over the debt crisis in the eurozone.

Mining stocks contributed more than a third of the gains on the FTSE 100 based on strong manufacturing figures in China and the US.

For a change banks were back in favour for the day as investors bought into riskier assets on the upbeat news.

The best performing bank was Barclays rising 5.8 per cent.

Shares on Wall Street rose 2 per cent on the back of data showing US construction spending had surged to an 18-month peak in November while manufacturing activity figures were also reported to have been the best in six months during December.

The Standard and Poor's 500 Index climbed to a two-month high. All 10 of the main industry groups on the index rose except for the utility stocks.

Bank of America, Alcoa, JP Morgan Chase and Caterpillar all rallied more than 3.5 per cent on the Dow Jones Industrial Average which led to gains in 28 of 30 stocks.

European stocks ended at a five-month closing high with FTSEurofirst 300 index of top European shares rising 1.6 per cent, its highest close since last August. The main players were BHP Billiton, the world’s biggest mining stock, and rival Rio Tinto which climbed 6.2 per cent and 6.4 per cent respectively.

Meanwhile, Germany’s DAX gained 1.5 per cent spurred on by the auto sector which climbed 3 per cent based on new car registrations which rose 6.1 per cent in December. France’s CAC 40 rose 0.7 per cent.

Copper prices hit a three-week high after the expansion in manufacturing in the US and China boosted hopes for stronger metals demand.

Oil prices rose more than 3 per cent as tensions increased between Iran and the US. This was based in part on fears of possible supply disruptions due to Tehran’s threats to act if Washington sent a naval carrier to the Persian Gulf. The strait between Iran and Oman at the mouth of the gulf accounts for nearly 40 per cent of oil consumed globally.