To the Super Troupers, we say Thank you for the Music

By Bob Tallent
Remember, you can come back to the videos & dip in and out of them as often as you like.

This band, which came from a non English speaking country, became one of the most commercially successful acts in the history of pop music.  Topping the charts worldwide between 1972 and 1982, they sold over 370 million records in English speaking countries.  They were formed in November 1970, won the Eurovision for Sweden in 1974 and became by far one of the most successful acts of that decade; even one of the biggest phenomenon’s of the whole 20th century. 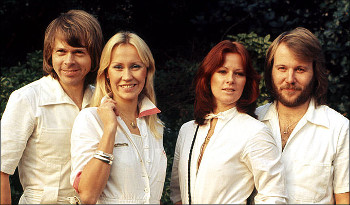 ABBA consisted of Anni-Frid Lyngstad (Frida), Bjorn Ulvaeus, Benny Andersson and Agnetha Faltskog.  Anni-Frid and Benny were a married couple as were Bjorn and Agnetha (both couples later divorced).  The name "ABBA" is an acronym formed from the first letters of each of the group members' given names (Agnetha, Bjorn, Benny, Anni-Frid) and the group took this name officially in late 1973.  The group's name is officially trademarked with the first "B" reversed so that the left and right halves of the name are mirror-images of one another.

ABBA reached international popularity employing catchy song hooks, simple lyrics, sound effects (reverb, phasing) and a “Wall of Sound”  achieved by overdubbing the female singers' voices in multiple harmonies. As their popularity grew, they were sought after to tour Europe, Australia and North America.   They developed a large number of ardent fans, notably in Australia. Touring became a quarrelsome issue, being particularly unpopular with Agnetha, but they continued to release studio albums to great commercial success. At the height of their popularityboth relationships began suffering strain that led ultimately to the collapse of first the Bjorn Ulvaeus/Agnetha Faltskog marriage (in 1979) and then of the Benny Andersson/Anni-Frid Lyngstad marriage in 1981.  In the late 70's and early 80's these relationship changes began manifesting in the group's music as they produced more thoughtful, introspective lyrics with different compositions.

The musical Mamma Mia, which contained their music, toured worldwide and had a movie version released in July 2008 (one of the highest grossing films in the UK), with Pierce Brosnan, who can sing as well as me, singing.  The film premiere took place at the Benny Andersson-owned Rival Theatre at Mariatorget, Stockholm on 4th July 2008.  All four members of ABBA were present at the Stockholm premieres of both the musical (2005) and the film (2008).

The video on your left explains it all - it's 90 minutes long. It all began in June 1966, when Bjorn Ulvaeus (born 25th April 1945 in Gothenburg, Sweden) met Benny Andersson (born 16th December 1946 in Stockholm, Sweden). Bjorn was a member of the Hootenanny Singers, a popular folk music group, while Benny was a member of the Hep Stars – AKA the Swedish Beatles (Sweden's number one pop band at the time).

In the summer of 1966, the two groups were touring Sweden's popular open-air Folkpark circuit when they happened to meet up at a crossroads. The Hootenanny Singers were planning a party that night and invited the Hep Stars to come along. Bjorn and Benny soon found that they had a lot in common and when they met at another party later that summer they decided that they should try to write something together.

With the help of Bjorn’s father, they transported all the instruments and amplifiers to his office in the middle of the night. The result was a song called Isn't It Easy To Say, which was later recorded by the Hep Stars, and the first seeds had been sown for what eventually would blossom as ABBA.

By 1969, the popularity of the two groups had begun to fade, and after their respective summer tours of that year, the Hootenanny Singers became more or less a recording act doing the occasional live performance, while Benny chose to leave the Hep Stars altogether. The two friends continued to write and record songs encouraged by record company owner and publisher Stig Anderson who was to become ABBA's manager. Stig had great belief in the song writing talents of Bjorn and Benny.

Agnetha Faltskog (born 5th April 1950 in Jonkoping, Sweden) had a no. 1 record in Sweden when she was only 17 and was soon noted by the critics and songwriters as a talented singer/songwriter of schlager style songs. Along with her own compositions, she recorded covers of foreign hits and performed them on tours in Swedish folk parks. She briefly met Anni-Frid Lyngstad during a TV show in January 1968 and met Bjorn Ulvaeus at a concert venue a few months later.

Anni-Frid "Frida" Lyngstad (born 15th November 1945 in Norway sang from the age of thirteen with various dance bands and worked mainly in a jazz-oriented cabaret style. She also formed her own band, the Anni-Frid Four. In the summer of 1967, she won a national talent competition with the song "En ledig dag" ("A Day Off"), included in the EMI compilation Frida 1967-1972. The first prize was a recording contract with EMI Sweden and to perform live on the most popular TV show in Sweden. This first TV performance, amongst many others, is included in the 3 hour documentary Frida - The DVD. Frida released several singles on EMI and had many hits in the Swedish charts. When Benny Andersson started to produce her recordings in 1971, she got her first  no. 1 single, "Min egen stad" ("My Own Town"), for which all the future ABBA members sang the backup vocals. Frida toured and performed regularly in the folk park circuit and made appearances on radio and TV.

Meanwhile, they continued to appear on each other's records, and working together in different gatherings. In July 1971 Bjorn and Agnetha got married, and in the autumn of that year Bjorn and Benny started working as house producers at Stig Anderson's record company Polar.

In the spring of 1972, it was decided to try the idea of a group again, and the first true ABBA single, People Need Love, was recorded. It was released under the somewhat ungainly name "Bjorn & Benny, Agnetha & Anni-Frid", it became a Top Twenty hit in Sweden. On the back of that success, the two couples started to record a whole album together in the autumn of 1972, although they were far from sure if there was any long-term future in the group. A year later, the group entered the 1973 Eurovision Song Contest, with the song 'Ring Ring', coming third. In the studio, producer Michael B. Tretow, had been experimenting with new production techniques, called ‘wall of sound’, which was to become the whole new ABBA sound. The group, still awkwardly called 'Bjorn & Benny, Agnetha & Anni-Frid' released the album 'Ring Ring' (1973), which did well, with the title single a hit in many parts of Europe.

Benny was tired of local success and wanted to break into the UK and US markets. He was also tired of the long band name so using an acronym of the first letters of their names started referring to the band as ABBA. It was actually a bit of a joke, because at the time there was a fish canning company in Sweden with the same name. Stig decided though that as the fish canners were unknown outside of Sweden they would keep the short and far catchier name of ABBA. The band had to later negotiate with the fish canners for the right to use the name.

On 6th April 1974, the group finally won the Eurovision Song Contest in Brightonwith 'Waterloo'. See the video on your left. It was a glam-rock inspired song produced by Michael B. Tretow.  This put them firmly on the musical map. Britain was now fully aware of the distinctive ABBA group and 'Waterloo' became ABBA’s first UK number one. It reached number six in the US.

In 1975, they released their second album with the single SOS.  Then they released a 'Greatest Hits' (1975) album, even although they had only had five Top 40 hits in the UK and US by that time. In January 1976, 'Mamma Mia' made number one in the UK.

In 1976 the album 'Arrival' not only showed a new height of achievement in terms of song writing and studio work, but produced three huge hits, 'Money, Money, Money', 'Knowing Me, Knowing You', and 'Dancing Queen' (the latter arguably being both their most definitive and most enduring song).

ABBA was moving into the arena of disco, which had exploded in 1977, with the Bee Gees 'Saturday Night Fever' and Donna Summer ‘Love to Love’. ABBA released the single 'Summer Night City' (1978) and after that, the album 'Voulez-Vous' (1979), both with a distinctly disco sound. The reaction to this album from the UK and Europe was not as strongly favourable as that of the US. Singles from the album: 'Does Your Mother Know', 'Chiquitita', 'Voulez-Vous', and 'I Have a Dream' all found their way onto the charts.

In January 1979, ABBA performed at the Music for UNICEF Concert, donating all royalties for the song to the children’s charity, in perpetuity. Their best-known disco hit 'Gimme! Gimme! Gimme! A Man After Midnight' was featured as a brand new track on the 'Greatest Hits Vol. 2' (1979) album. Also that year, ABBA toured the US and Canada, playing to enormous audiences. The full concert video is on your right and has many top artists.

In the 1980s ABBA’s style moved to more personal lyrics and more pronounced synthesisers. They released the single 'The Winner Takes it All' in January 1980 which created interest in the upcoming album 'Super Trouper' (1980) to set the record for the most pre-orders ever received for a UK album. The single was allegedly about Agnetha and Bjorn’s marriage, which was going through a rough patch at that time. Another hit single from this album was 'Lay Your Love on Me'.

ABBA released their final studio album 'The Visitors' (1981). The full album is on your right.  Whilst this album showed a newfound depth and maturity, it was the start of their commercial decline. The group’s last hit single 'One of Us' was a global hit in December 1981. The group and the couples were now showing signs of distress and ABBA disbanded towards the end of 1983.  The two couples also divorced in 1979 and 1981. ABBA’s popularity didn’t seem to wane after they broke up. They continued to release compilation albums of their greatest hits, from 'Thank You For The Music' (1983) to their most recent, 'The Complete Studio Recordings' (2005).

On 6th April 2004, Bjorn, Benny and Frida travelled to London for the 30th Anniversary of their Eurovision Song Contest win in 1974. Check out the video on your left. They appeared on stage after the 5th anniversary performance of 'Mamma Mia!'. In 1993, "Dancing Queen" became a staple of U2's "Zoo TV" tour.  Benny and Bjorn even joined the Irish superstars on-stage in Stockholm. See the video below.

There are many copycat ABBA groups all around the world making good 'money, money money' performing their songs.  This is the best compliment anyone can give them.  Despite all this revival success no reunion has been on the cards as yet and the group members constantly deny that they have any such plans.

But the music is still there for everyone to enjoy.

Hit the NEXT button below for 24 more great videos, including full concerts and Mamma Mia - the Movie.