The Long and Winding Road after Breakup

Part 1 can be seen here

Part 2 can be seen here

Part 3 can be seen here 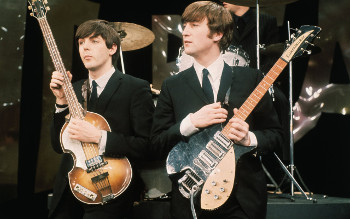 John Lennon and Paul McCartneyAfter looking into George and Ringo last week, this week I have been looking into what John and Paul did after the Beatles,

John Lennon - "Everybody loves you when you're six foot in the ground."

In the late 1960s John began performing and making albums with his second wife Yoko Ono, as the Beatles began to break up. Their first two albums, "Two Virgins" and "Life With The Lions", were experimental and flops by Beatles standards, while their "Wedding Album" was almost a vanity work, but their live album "Live Peace In Toronto" became a Top Ten hit, at the end of the 1960s. In the early 1970s John and Yoko continued to record together, making television appearances and performing at charity concerts.

He was shot by Mark David Chapman at the entrance of the building where he lived, The Dakota, in New York City on 8 December 1980. Lennon had just returned from Record Plant Studio with his wife, Yoko Ono.

Lennon was pronounced dead on arrival at St. Luke's-Roosevelt Hospital Centre, where it was stated that nobody could have lived for more than a few minutes after sustaining such injuries. Shortly after local news stations reported Lennon's death, crowds gathered at Roosevelt Hospital and in front of the Dakota. Lennon was cremated on 10 December 1980 at the Fern cliff Cemetery in Hartsdale, New York; the ashes were given to Ono, who chose not to hold a funeral for him.

Paul McCartney  - " I don't work at being ordinary." 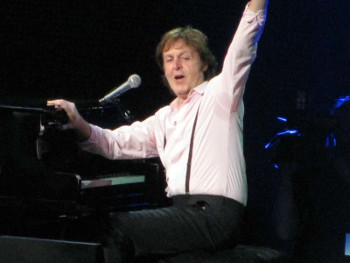 Paul McCartneyMcCartney was 28 when he started his solo career, and formed his new band, Wings. His first solo album, "McCartney," was a #1 hit and spawned the evergreen ballad "Maybe I'm Amazed", yet critical reaction was mixed. He continued to release music with Wings that eventually became one of the most commercially successful groups of the 70s. "Band on the Run" won two Grammy Awards and remained the Wings' most lauded work. The 1977 release "Mull of Kintyre" stayed at #1 in the UK for nine weeks, and was the highest selling single in the UK for seven years. In 1978 McCartney's theme "Rockestra" won him another Grammy Award. In 1979, together with Elvis Costello, he organized Concerts for the People of Kampuchea. In 1979, McCartney released his solo album "Wonderful Christmastime" which remained popular ever since.

In 1980 McCartney was arrested in Tokyo, Japan, for marijuana possession, and after a ten-day stint in jail, he was released to a media firestorm. He retreated into seclusion after the arrest, and was comforted by his wife Linda. Yet he had another traumatic experience when his ex-band-mate, John Lennon, was shot dead by a crazed fan near his home in New York City on December 8, 1980. McCartney did not play any live concerts for some time because he was nervous that he would be "the next" to be murdered.

After almost a year of absence from the music scene, McCartney returned in 1982 with the album "Tug of War," which was well received by public and enjoyed great critical acclaim. He continued a successful career as a solo artist, collaborated with wife Linda McCartney, and writers such as Elvis Costello. During the 80s, McCartney released such hits as 'No More Lonely Nights' and his first compilation, "All the Best." In 1989, he started his first concert tour since the John Lennon's murder.

In 1994, the three surviving members of The Beatles, McCartney, Harrison, and Starr, reunited and produced Lennon's previously unknown song "Free as a Bird." It was preserved by Yoko Ono on a tape recording made by Lennon in 1977. The song was re-arranged and re-mixed by George Martin at the Abbey Road Studios with the voices of three surviving members. The Beatles Anthology TV documentary series was watched by 420 million people in 1995.

During the 1990s McCartney concentrated on composing classical works for the Royal Liverpool Philharmonic Society, such as "The Liverpool Oratorio" involving a choir and symphony, and "A Leaf" solo-piano project, both released in 1995. That same year he was working on a new pop album, "Flaming Pie," when his wife Linda was diagnosed with breast cancer, and caring for his wife during her illness meant only sporadic public appearances during that time. The album was released in 1997 to both critical and commercial success, debuting at number 2 on both the UK and US pop charts. That same year he was knighted by Queen Elizabeth II as Sir Paul McCartney for his services to music.

In April 1998, Linda McCartney, his beloved wife of almost 30 years, mother of their four children, and his steady partner in music, died of breast cancer. McCartney suffered from a severe depression and had to undergo medical treatment. He spent much of the next year away from the public eye, emerging only to campaign on behalf of his late wife for animal rights and vegetarian causes.

He eventually returned to the studio, releasing an album of rock n'roll covers in 1999. "Run Devil Run" made both Entertainment Weekly and USA Today's year-end top ten lists. McCartney also slowly returned to the public spotlight with the release of his another classical album, "Working Classical" in November 1999, in recording by the London Symphony Orchestra. His 2000 release "A Garland for Linda" was a choral tribute album, which raised funds to aid cancer survivors.

In 2000 he was invited by Heather Mills, a disabled ex-model, to her 32nd birthday. McCartney wrote songs dedicated to her after which he and Mills developed a romantic relationship and became engaged in 2001. However, the year brought him a cascade of traumatic experiences. On September 11, 2001, Paul McCartney was sitting on a plane in New York when the World Trade Centre tragedy occurred in front of his eyes, and he was able to witness the events from his seat. Yet there was sadness, as his former band-mate George Harrison died of cancer in November, 2001.

Recouperating from the stressful year, McCartney received the 2002 Academy Award-nomination for the title song to the movie Vanilla Sky (2001), and also went on his first concert tour in several years. In June, 2002, Sir Paul McCartney and Heather Mills married in a castle in Monaghan, Ireland. Their daughter, Beatrice Milly McCartney, was born in October 2003. Four years later, the high profile marriage ended in divorce, after a widely publicized litigation. "Whenever you're going through difficult times, I'm at the moment, it's really cool to be able to escape into music" says Paul McCartney.

In 2003 Paul McCartney rocked the Red Square in Moscow with his show "Back in USSR" which was attended by his former opponents from the former Soviet KGB, including the Russian president Vladimir Putin himself, who invited McCartney to be the guest of honour in the Kremlin. In 2004 Paul McCartney received a birthday present from the Russian president. In June 2004, he and Heather Mills-McCartney stayed as special guests at suburban Royal Palaces of Russian Tsars in St. Petersburg, Russia. There he staged a spectacular show near the Tsar's Winter Palace in St. Petersburg where the Communist Revolution took place, just imagine.

In 2005 the Entertainment magazine poll named The Beatles the most iconic entertainers of the 20th Century. In 2006, the guitar on which Paul McCartney played his first chords and impressed John Lennon was sold at an auction for over $600,000.

On June 18, 2006, Paul McCartney celebrated his 64th birthday, as in his song "when I'm Sixty-Four." McCartney's celebrity status made it a cultural milestone for a generation of those born in the baby-boom era who grew up with the music of The Beatles during the 1960s. The prophetic message in the song has been intertwined with McCartney's personal life and his career.

In 2007 McCartney left his long-time label, EMI, and signed with Los Angeles based Hear Music. He learned to play mandolin to create a refreshing feeling for his latest album "Memory Almost Full," then appeared in Apple Computer's commercial for iPod iTunes to promote the album. In June 2007 McCartney appeared together with Ringo Starr, Yoko Ono, Olivia Harrison and Guy Laliberté in a live broadcast from the "Revolution" Lounge at the Mirage Hotel and Casino in Las Vegas.

So to finish on a Paul McCartney quote:
‘Somebody said to me, The Beatles were anti-materialistic.' That's a huge myth.  John Lennon and I literally used to sit down and say, 'Now, let's write a swimming pool.'