The Long and Winding Road after Breakup

Part 1 can be seen here

Part 2 can be seen here

Part 4 can be seen here 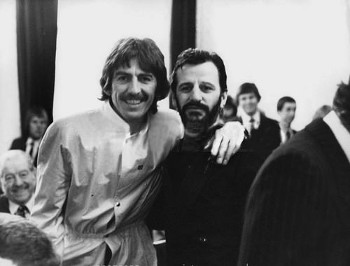 George Harrison and Ringo StarrThe year is 1970.  The Apollo 13 mission to the moon is abandoned, a Boeing 747 makes its first commercial passenger trip to London, Brazil wins their third world cup with Pele as the captain and on the 10th April 1970 Paul McCartney announces that the Beatles has disbanded.

Brian Epstein's death, Yoko Ono, George Harrison wanting to write more and McCartney's distaste with Phil Sectors' treatment of some songs on the upcoming Let It Be album set the wheels in motion and the biggest band on the planet were no more. So the "Fab Four" all set off in different directions in 1970, each to his own and each on his own.

George Harrison - "I wanted to be successful, not famous."

So let's begin with George.  The above quote sums up quite well his outlook and attitude towards The Beatles in 1970.  I don't think he would ever be ungrateful about being in the Fab Four but another of his quotes showed his feelings towards the Beatles at the time;  "The biggest break in my career was getting into the Beatles in 1962. The second biggest break since then is getting out of them."

As the Beatles disbanded in 1970, Harrison's interest in Indian music soon extended into a yearning to learn more about eastern spiritual practices. In 1968, he led the Beatles on a journey to northern India to study transcendental meditation under Maharishi Mahesh Yogi. After the breakup of the Beatles, Harrison pursued on a solo career. He immediately assembled a studio band consisting of ex-Beatle, Ringo Starr, guitarist Eric Clapton, keyboardist Billy Preston and others to record all of the songs that had never made it on to the Beatles catalogue. The result was a three-disc album, "All Things Must Pass." While one of its signature songs, "My Sweet Lord," was later deemed too similar in style to the Chiffons 1963 hit, "He's So Fine," forcing the guitarist to cough up nearly $600,000, the album as a whole remains Harrison's most acclaimed record.

Not long after the album's release, Harrison brandished his charitable work and his continued passion for the east, when he put together a series of groundbreaking benefit concerts at New York City's Madison Square Garden to raise money for refugees in Bangladesh. Known as the Concert for Bangladesh, the shows, which featured Bob Dylan, Leon Russell, and Ravi Shankar, would go on to raise some $15 million for UNICEF, produced a Grammy winning album, and laid the groundwork for future benefit shows like Live Aid and Farm Aid.

But not everything about post-Beatle life went smoothly for Harrison. In 1974, his marriage to Pattie Boyd, whom he'd married eight years before, ended when she left him for Eric Clapton. His studio work struggled, too, from 1973-77, starting with, "Living in the Material World", "Extra Texture," and "33 1/3," whose albums all failed to meet sales expectations. Following the release of that last album, Harrison took a short break from music, winding down his self-started label, Dark Horse, which had produced works for a number of other bands, and started his own film production company, Handmade Films. The outfit underwrote Monty Python's Life of Brian (1979) and would go on to put out 26 other movies before Harrison sold his interest in the company in 1994.

In 1979, he returned to the studio to release his self-titled album. It was followed two years later with "Somewhere in England," which was still being worked on at the time of John Lennon's assassination late in December 1980. The record eventually included the Lennon tribute track, "All Those Years Ago," a song which reunited ex-Beatles Paul McCartney and Ringo Starr, along with ex-Wings members Denny Laine and Linda McCartney.

While the song was a hit, the album, its predecessor, and its successor, "Gone Troppo," wasn't. For Harrison, the lack of commercial appeal and the constant battles with music executives proved draining and prompted another studio hiatus.

In February 1988, Harrison formed the Travelling Wilburys, for his group's first album. The record featured a pair of hits, and spawned the guitarist to link up with Lynne, the late Roy Orbison, Tom Petty, and Bob Dylan to join his band, which was a "super group." Buoyed by the group's commercial success with its two studio albums Harrison took to the road with his new band mates in 1992, embarking on his first international tour in 18 years.

Not long after he was reunited with McCartney and Starr for the creation of an exhaustive three-part release of the Beatles Anthology, which featured alternative takes, rare tracks, and a John Lennon demo called "Free as a Bird," that the three surviving Beatles completed in the studio. The song went on to become the group's 34th Top 10 single.

From there, however, Harrison largely became homebody, keeping himself busy with gardening and his cars at his expansive and restored home in Henley-on-Thames in south Oxfordshire, England.

Still, the ensuing years were not completely stress free. In 1997, Harrison, a long-time smoker, reportedly was successfully treated for throat cancer. Two and a half years later, that December, his life was again put on the line when a deranged 33-year-old Beatles fan somehow managed to circumvent Harrison's intricate security system and detail and broke into his home, attacking the musician and his wife Olivia with a knife. Harrison was treated for a collapsed lung and minor stab wounds. Olivia suffered several cuts and bruises.

In May 2001, Harrison's cancer returned. There was lung surgery, but doctors soon discovered the cancer had spread to his brain. That autumn he travelled to the United States for treatment and eventually landed at the UCLA Medical Centre in Los Angeles. He died November 29, 2001, at his ex-band mates' Paul McCartney's house in Los Angeles, California, at aged 58, with his wife and son at his side.

In addition, in late 2002, just one year after his death, Harrison's final studio album, "Brainwashed," also produced by Lynne, Dhani Harrison and himself, featured a collection of songs he'd been working on at the time of his death, was finished by his son and released.

Ringo Starr - "Well, I'm getting happier all the time,

which is very nice."

Ringo wrote two original songs: "Don't Pass Me By" and "Octopus' Garden" for which he also sang the lead vocals. Besides his drumming, Ringo's voice was recorded on many of the most popular Beatle's songs, contributing to their unique sound and tight harmonies.

He had a hectic solo career during the 1970s, after the breakup of The Beatles. However, Ringo eventually emerged as a steady performer, and sustained a very popular solo career, turning out a dozen chart-topping hit songs and eight best-selling albums. He made a famous appearance together with George Harrison, Ravi Shankar, and other popular musicians in the landmark 'Concert for Bangladesh' in 1971. His 1973 solo release "Ringo" was the last album to feature all four living Beatles, although not on the same song. He also appeared in various TV shows, including his own special, Ringo (1978) (TV), and a TV mini-series, Princess Daisy (1983) (TV), with his wife Barbara. In 1984 he did narration for the children's series "Thomas the Tank Engine & Friends" (1984). During the 1980s, after having a long period of troubles with alcohol, Ringo and his wife attended a rehabilitation clinic, and came back to the scene sober. He made the All-Starr Band tour of America and Japan. The tour was so popular that he formed another All-Starr Band line-up in 1992, and began an American and European tour in June of that year. Since then Ringo Starr has been enjoying a continuous career as the leader of the All-Starr Band. In 1994, along with George Harrison and Paul McCartney, the three surviving members of The Beatles, reunited and produced Lennon's previously unknown song 'Free as a Bird'. It was preserved by 'Yoko Ono' on a tape recording made by John Lennon in 1977. The song was re-arranged and re-mixed with the voices of three surviving members, and became an international hit. 'Free as a Bird' was also included in The Beatles Anthology TV documentary which was watched by 420 million people in 1995. Ringo, Paul and George sang their new songs, in addition to mixing their voices and music arrangements to John Lennon demos.

Ringo's old friend and band-mate George Harrison passed away on November 29, 2001, after a long battle against lung cancer. The following year, on the anniversary of Harrison's death, Ringo Starr, Paul McCartney and Eric Clapton appeared in a Concert For George, to raise money for the support of Harrison's legacy in exploration of alternative lifestyles, views and philosophies. Starr also supported charitable organizations with consideration to those who have special needs.

Ringo Starr updated the role of a drummer in popular music, he made drummer an equal partner to the lead musicians, thus changing the whole paradigm in how the public saw drummers. His original performing style evolved from adjusting his natural left-handed manner of playing to the right-handed drum set, and allowing his left hand lead in weaving a pattern tightly intertwined with the music of other players, and adding such enhancements as unusual accents and stops. Ringo's musical originality as well as his inventive drumming patterns, time signatures and accentuations became essential to the sound of The Beatles. His on-stage presence and acting talent as well as his humour and musicianship was the essential part in formation and remarkable career of The Beatles.

He was married to his long-time girlfriend, Maureen Cox, from 1965 - 1975, and they had three children: Zak Starkey, Jason, and Lee. The couple broke up in July of 1975, and he married actress Barbara Bach. Ringo Starr divides his time between his residences in England, in Switzerland and his home in Los Angeles, California.

The Long and Winding Road After Breakup

will look at John Lennon and Paul McCartney and

their solo careers after the Beatles.