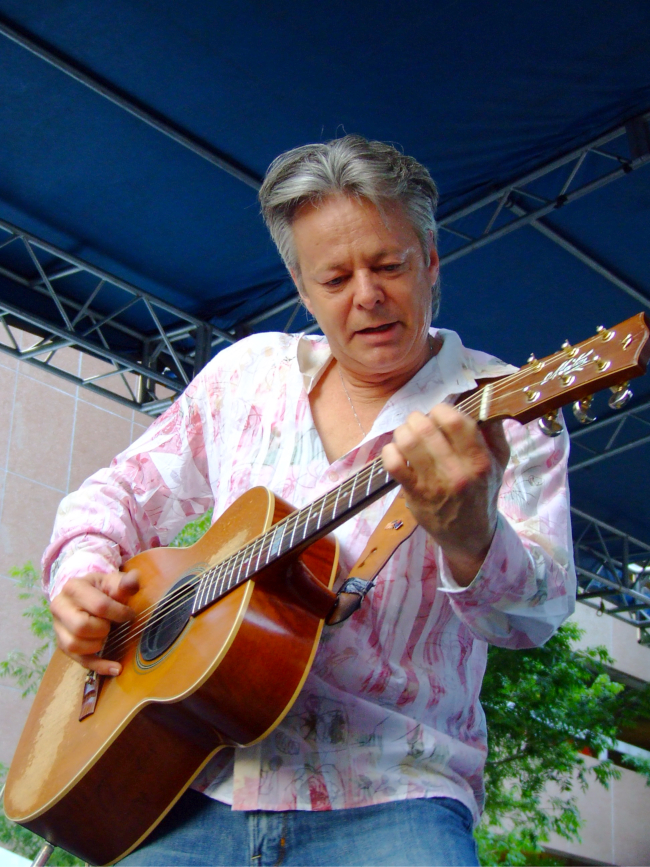 I’ve been trying to teach myself acoustic guitar for the past couple of years and am finding it very difficult.  Add on to that the fact that I can’t sing – you will clear a room very quickly if I try to sing, even the dogs howl – and you don’t have a recipe for success.  In saying all that, I keep trying and I try to teach myself finger-style guitar.  The internet is a huge resource for people like me.  When I was searching a couple of years ago, I came across a guy called Tommy Emmanuel.  When I saw him on YouTube, I was blown away.  What he could do with an acoustic guitar was physically impossible, yet he did it.

Tommy EmmanuelI began to look at his videos very closely to figure out how he did it. Even in some of his instructional videos, when he slows it down to snails pace, it’s still impossible.  I think he must have a brain for each of his 10 fingers.  Even when you think that he’s strumming with his right hand, he is in fact picking out each string.

He can play drums, percussion, bass, rhythm and melody all at the same time on his guitar.  He doesn’t use backing tracks and no gimmicks, just pure genius.

Tommy is Australian and his family are all musicians.  At the age of four, his parents put him on stage to play bass in the band.  They gave him a 6 string guitar and he taught himself bass on that.  Then about three years later he saw a guy on stage with a four string guitar and he asked what that was.  So it was explained to him that it was a bass guitar and he said that he learnt bass on a six string.  That was his foundation into his finger-style style.  He can play bass, rhythm, percussion and melody all at the same time.  As I said, impossible, yet he can do it.  Chet Atkins was his role model and awarded Tommy with a CGP – Certified Guitar Player (only five people in the world have this honour Chet Atkins, John Knowles, Tommy Emmanuel, Steve Wariner and Jerry Reed)

I saw him twice in Dublin - in the Helix last year and again last Saturday night.  I've also seen almost every video of his.  Last year my wife, Loreto, came with me and was very apprehensive about it.  She expected a guy just playing guitar, like you’d see in a pub or at a show.  As soon as he walked on stage, she was hooked.  She insisted on coming again this year and she loved every second of it.  Tony and Ann, who came with us this year, were also enthralled by his mastery.  Last year, he asked from the stage, ‘does anybody here play the guitar?  Well, everyone nearly fell around laughing.  Everybody, except Loreto, played the guitar.  They were all there to see the master at work.

He is a natural performer with no airs or graces.  What you see is what you get and what you get is the best in the world without exception.  He loves what he does and shows total respect for his audience and fans.  The show started at 8 o’clock on the button with a support act – Gareth Pearson, also brilliant.  That ended at 8.35.  At 8.45 Tommy was on stage and ended at 11.05.  No breaks.  He would have kept going, only for the fact that the Helix management told him to stop. 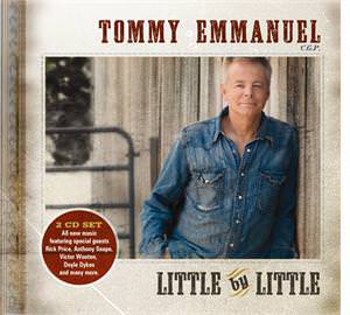 I arranged a meet and greet with him last Saturday but unfortunately it didn’t happen.  It seems they were playing in Cork the night before and they all picked up the 24 hour tummy bug.  They put it up on his facebook page complete with a photo of Tommy asleep on a couch wrapped around his guitar.  Even though he was sick at the time, the show was amazing.  You would never have known.

Tommy has been playing on stage now for over 50 years and I saw him in interview once where he said that he plays the guitar for at least eight hours every day and he loves every bit of it.

On 15th February 2011, Tommy released his latest solo 2-disc album Little By Little to great reviews.  I’ve ordered it and it’s in the post.  I’ve actually got special treatment because Tommy is personally signing it for me, thanks to Ed Lawless in Nashville.  The Knoxville News Sentinel’s Wayne Bledsoe raved, “Emmanuel’s playing, compositions and covers are all gorgeous…he never fails to deliver.” He continued, “For those who aren’t familiar with Emmanuel, he is one of the world’s most astounding guitarists to ever perform on a stage. In live performance, he is a marvel of speed, inventiveness and showmanship.”  His Christmas album is also out and I’ve got it.

I hope he comes to the Helix again next year.  If he does, Loreto and I will be there - and that's written in stone.  This time I hope to meet him in person.

Here are some YouTube videos for you to watch.  One of them is from last Saturday.  Enjoy and watch his fingers.

At the Helix last Saturday.

Pure speed, brilliance and control.  The only bit that Tommy is better than me is the bit from 0 - 6.29

‘Somewhere over the Rainbow’. Watch closely at his opening on this piece.  I didn’t think harmonics like this was possible

In Cork last Friday when he had a tummy bug.  Watch and weep.
Percussion, melody, bass, rhythm. He even uses the Mike as a drum.  Unbelievable.

Angelina, one of his own pieces.

Now, after you’ve seen these, I challenge anybody, anywhere in the world, to find a better acoustic guitarist who has that zing on stage.