The Questions to these answers are in the previous article

The trick to this riddle is that the addition and subtraction are done at the wrong times to misdirect your thinking - and quite successfully for most.

Each of the 3 friends did indeed pay €9, not €10, and as far as the friends are concerned, they paid €27 for the night. But we know that the clerk will tell us that they were charged only €25 and when you add the €3 returned with the €2 kept by the bellhop, you come up with €30. 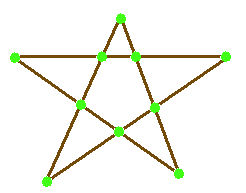 Plant them in shape of a star:

Sally was blind... she was reading a book in Braille.

There are six F's in the sentence.  One of average intelligence finds  three of them.  If you spotted four, you're above average.  If you got five, you can turn your nose up at most anybody.  If you caught six, you are a genius.  There is no catch.  Many people forget the OFs.  The human brain tends to see them as "V's" instead of "F's".

The trawler rises with the waves so no step will go under water.

From the base to the summit, the volcano Mauna Kea in Hawaii is the tallest.  Most of it just happens to be underwater

Mt McKinley in Alaska is tallest on land

Mt Everest is the highest, but not the tallest because it starts on the high Tibetan Plateau.

935.  With all the other numbers, the 3rd digit equals the product of the other 2.

Because then it wouldn't be a nose any more; it would become a foot! (12 inches and above - easy!)