The Look of a Curious MindPresident Barak Obama has unveiled an unprecedented policy this week which deals with climate change.  The proposed plan seeks to cut existing carbon emissions from power plants.  They were not announced by President Obama, but by the Environmental Protection Agency (EPA) administrator Gina McCarthy.  McCarthy announced that carbon dioxide emissions would be cut 30% from 2005 levels or 15%-17% from current levels by 2030.

The EPA says that the new regulations would “Fight climate change while supplying America with reliable and affordable power”.  Many are calling the plan, the most important piece of legislation to combat climate change in U.S. history

Power plants make up the largest producer of carbon dioxide in the U.S. accounting for 40% of all emissions.  The new regulations target coal plans in particular.  According to the EPA, these plants contributed 1.45 billion metric tons or 67% of total greenhouse emissions by the power sector, the equivalent to 300 million cars.  Since each state has different economic and power needs, the EPA is allowing states to create their own standards for carbon dioxide reduction.

The announcement comes not to long after the release of the Third U.S. National Climate Assessment by the Obama Administration.  The report contains research from over 200 scientists and details the affects of climate change on the U.S.  According to the report, climate change is accelerating and predicts that the Southwest United States becoming drier and hotter, coastlines will experience stronger storms, and ice in Alaska will melt.

The Intergovernmental Panel on Climate Change’s (IPCC) also released a report recently.  It is sponsored by the United Nations and consists of 194 governments with 1250 scientists from around the globe.  The current report is the 5th that the IPCC has published and was released in three installments over 7 months.  It concludes that the earth may experience a 2º C temperature increase by 2030 and up to a 4.7º C increase by the end of the century. 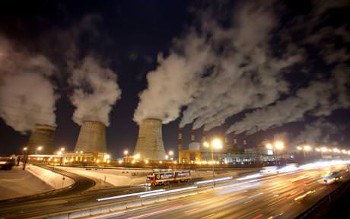 Climate ChangeBoth of these reports express a need for action to be taken by the world’s industrial leaders.  They paint a picture of a planet in peril and the outcome could potentially be disastrous on an economic and humane level.  The United States is the second largest producer of greenhouse emissions in the world and while it can impact climate change, action from other countries is necessary.  That may already be happening.  One day after the EPA announced the plan, China announced that it plans to cap carbon emissions as well.  The world’s largest producer of greenhouse gasses plans to limit its production over the next 5 years.  He Jiankun, deputy director of China’s Expert Committee on Climate Change says that China will focus on two ways of controlling carbon emissions: intensity and an absolute cap.  We can only wait and see if China follows through with is proposal but it seems that President Obama’s climate plan may already be making an impact.

Climate change is a highly debated issue in U.S. politics and the recent climate plan certainly does not help things.  Texas Governor Rick Perry and Senate Minority Leader Mitch McConnell have dubbed any of President Obama’s climate policies as a power grab and a war on coal, a view that most Republicans share.  They also feel new regulations are unfair to their states because they rely heavily on coal energy.  Other Republicans have also expressed their views as well.  Florida Senator Marco Rubio was asked by ABC news about his opinion and replied:  “I do not believe that human activity is causing these dramatic changes to our climate the way these scientists are portraying it. And I do not believe that the laws that they propose we pass will do anything about it, except it will destroy our economy.”  University of Sussex Professor Richard Tol also expressed a similar tone in response to the IPCC report by saying:  “The first rule of climate policy should be:  Do not harm economic growth.”

Scientists who study the environment are not making laws or creating economic policy, they are observing, testing, and making conclusions based on what they have recorded and their knowledge of science.  Many detractors cite a disbelief in human action contributing to climate change with skewed statistics that do not match most scientists’ findings.  Neil Degrasse Tyson said it best: “Science exists whether you believe in it or not.  The science behind the change is quite simple and instead of trashing it, we should embrace it.  Instead of debating an economic disaster if we reduce carbon emissions, why don’t we embrace it?  This is an opportunity to segue from old energy technology to new, cleaner, more efficient and cost effective energy.  If that does not sound like an economic driver, I don’t know what will”.