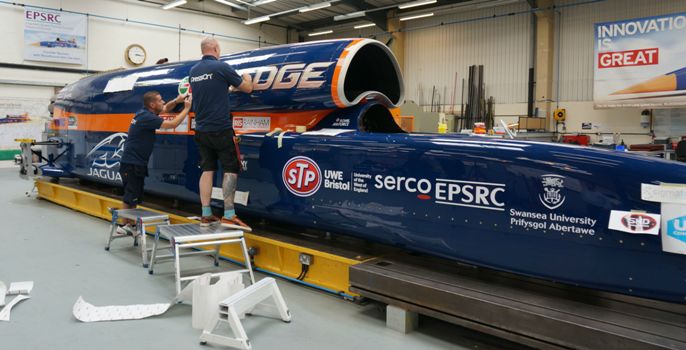 UK based PressOn, the large format digital printing company based in Chatham, Kent, were recently asked to be part of a very special event. PressOn wrapped the body and tail fin of the World land speed record attempt car – BLOODHOUND SSC. The car was unveiled in Canary Wharf on 24 September 2015 and shown for the first time in its record attempt configuration.

BLOODHOUND SSC is considered the World’s fastest and most advanced racing car. It has been designed to travel faster than the speed of sound, and hopefully will achieve speeds of over 1,000 mph. It has been eight years in development and has notched up a cost £13.5 million. Built in BLOODHOUND’S Technical Centre, in Bristol, the vehicle is 13.5m long and uses jet and rocket motors to produce c. 135,000 thrust hp. The 2m high tail fin provides stability at high speed and was in place for the first time at its debut. In all, The BLOODHOUND project has had input from over 350 companies and universities.

For the event, PressOn wrapped the body and tail fin of BLOODHOUND in vinyl. PressOn’s MD, Nigel Webster said, 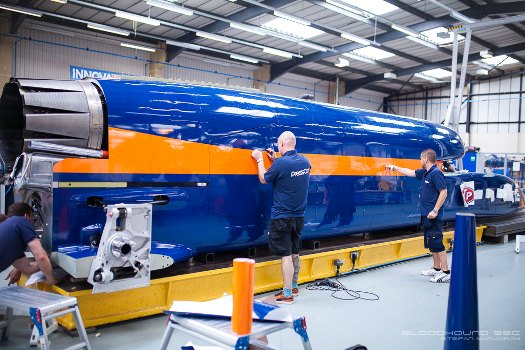 PressOn team installing graphics on Bloodhound SSC“To be asked to be involved in the world debut of BLOODHOUND was an incredible honour. The wrap itself was a very straightforward job, but the opportunity to work with the collaborators on the BLOODHOUND project is an unforgettable experience. It’s definitely one of PressOn’s highlights. “