Ireland was seconds away from

pulling off the greatest shock

in their rugby history. 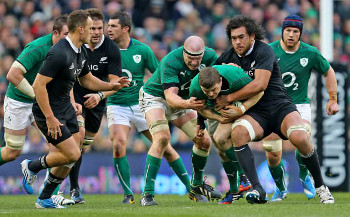 brian odriscoll supported by paul oconnell tackled by luke romanoThis was the 28th time Ireland faced up against the All Blacks and they are still waiting for a first win against them after that heartbreaking finale.

In the process New Zealand became the first side in the professional era to win all their games in a calendar year - this was their 14th straight success since losing at Twickenham last December.

Ireland got off to a flyer in the first half. There were Irish heroes across the pitch. Conor Murray comprehensively outplayed opposite number Aaron Smith, Rory Best gave a brilliant 15 minutes at the start of the game, Sean O’Brien was bullish-defiance personified at the ruck, and Rob Kearney saw Ireland through the most difficult of moments. In the centre, Gordon D’Arcy gave one of the great performances ever in the green shirt.

Ireland had a scrum in a dangerous position and, already, belief was surging through the crowd as the Irish battered the New Zealand line. That series of drives yielded what nobody had expected: a try for Ireland, scored with a powerful dive close to the line by Murray. Jonathan Sexton added the extras to give Ireland the perfect start.

Ireland had looked second to the punch in every facet of the game against Australia last week but they stepped into the collisions with intent from the very first minute against the All Blacks.

New Zealand built consistent pressure after half-time and Savea came in off his wing to pinch the Irish defence, before full-back Dagg hurtled across the try line. English Television Match Official Graham Hughes was called to adjudicate by Welsh referee Nigel Owens. And Hughes chalked it off, much to the visitors' surprise. New Zealand came again from their five-metre scrum, Murray stripped Ben Smith to give Ireland the steal - only for Toner to be penalised for obstruction. Cruden slotted the goal to cut Ireland's lead to 12, but failed with another penalty strike minutes later. 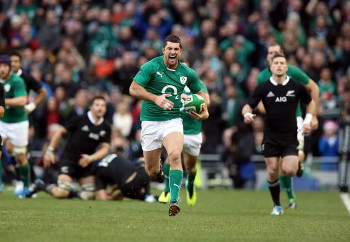 rob kearney scores a tryRead's mistimed tackle took Kearney out in mid-air, gifting Ireland a penalty and chance to clear from their own 22.Sexton's weak clearance and Bowe's missed tackle on Savea handed the initiative straight back to New Zealand though. Quick hands from Read, a half-break from Ben Smith and New Zealand were within whitewash range again - and a bloodied Franks barrelled over for the All Blacks' second converted try. Ireland responded, forcing a penalty deep in the Kiwis' 22, but Sexton could not extend the lead to eight, striking wide of the right-hand post. New Zealand inevitably pressed again, but Nonu's knock on and Cruden's ill-judged chip let Ireland off the hook. Ireland failed to drive tight phases to the conclusion, conceding a soft ruck penalty. New Zealand launched one final attack, Read, Ben Smith and Nonu prevalent: before Crotty got home in the left corner. 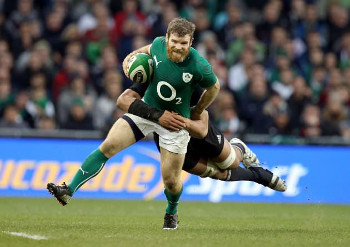 gordon darcy tackled by maa nonuThis was a fantastic spectacle for a rugby neutral like myself with Ireland showing so much commitment and heart in the game against an All Black side that has to go down as one of the best in modern times, Ireland should be very proud of their performance against the best side in the world. New Zealand deserves credit to for their incredible undefeated run and is surely one of the best teams in any sport around the globe at the moment.