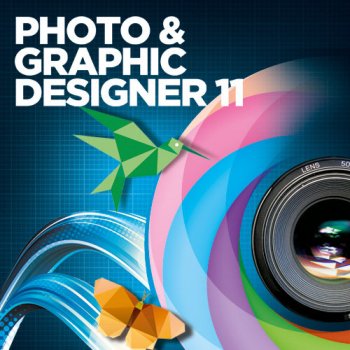 Charles Moir, Managing Director said “As the name suggests 'Photo & Graphic Designer' is more than just another photo editor. It's one of the most advanced and powerful vector graphics programs available, and seamlessly combines vector graphics with the photo editing features that any graphics enthusiast, small company or academic user are likely to need. It's simply the most advanced photo and graphics editing tool available, for the money. We believe the new real-time brush features are the fastest, most fluid available anywhere".

In this release there’s a big step forward for the Brush Tool with new Art Brush technology that smoothly stretches either vector or bitmap, in real time, along a freehand drawn line. It includes a range of high quality realistic textured brush effects emulating paint, chalk and water-colour effects. Users can also create their own bitmap (photo) or vector brush designs.

New to this version is the ability to sync files via Dropbox and Google Drive. So if a user has the same file open on multiple computers, and makes an edit then saves the file on one computer, it will be immediately updated in Photo & Graphic Designer on the other computers. As a bonus Dropbox and Google Drive maintain older versions of user’s files, thus providing an easy way of viewing and reverting back to earlier versions. This is a safe, easy and storage-saving way of maintaining multiple versions of website files

The Shape Painter Tool has extra flexibility offered by a new selection of vector shape editing tools (in the drop down list in the Shape Painter InfoBar). In the Transparency Tool 5 new W3C standard, web-safe and PDF-safe blend modes have been added - Overlay, Hard Light, Soft Light, Luminosity & Colour.

There are new and improved text features including autocorrect (the ability to create a personal list of abbreviations that expand when typed), text background colour options, easy font replacement throughout an entire document, and more. There are also significant improvements to the PDF import and export.

Xara Photo & Graphic Designer 11 includes two valuable free additions – the Premium version of MAGIX Online Photo Album to share photos with friends, families and colleagues (free for one year) and Photolooks 2, a powerful and flexible plug-in (previously sold by Red Giant for $199!) that can change the colour and light effects in a photo. It includes over 100 presets, but provides a powerful way of manipulating colour and light so that users can create their own custom effects.

For more information and a trial version visit xara.com